Puro (普羅 Pǔluó) is the deuteragonist of Changed. He is a Dark Latex wolf creature, capable of speech and helps the protagonist throughout the game.

Puro is a latex wolf-like creature with dark, dense, soft 'fur'. He appears to wear a white mask, somewhat resembling the mask of a female dark latex, but he has been confirmed to be male. He has white pupils, and when compared to other dark latex creatures, he is somewhat taller and has a larger tail.

Unlike the other, more instinctual monsters, Puro exhibits higher sapience than the rest of his species. He is a studious, curious, and compassionate being that humbles himself in wanting to become a better and better exemplar of his species. Though wary of humans, he is fascinated by them and even wishes to become one. As a dark latex beast, he is also a natural enemy of light latex monsters.

This article will only cover the demo currently available on Steam.

Puro seems to be slightly more instinctual in Special Edition. During a cutscene where the human is searching for a key card among some books, he approaches the protagonist from behind, talking to himself quietly, resisting the urge to transfur the human. When the latter turns around, Puro mentions the scent of the human's hindquarters- telling him that his pants smell strangely familiar. This is in reference to the fact that the apparel is made of benign latex, which can be activated by Dr. K's lasers.

Puro is found sweeping the library after the second tail chase. Puro greets the human, surprised that he did not see him come in. Dr. K then begins pressuring Puro over the library speakers to transfur the human. Puro refuses, confessing that he did plan to assimilate the protagonist in the beginning, but now only wants to accompany him. Puro asks the human if he trusts him, to which the latter is only able to affirm. Puro is surprised and excited by this response.

In this version, Puro also peeks over the human constantly when they're separated, and even warns him to watch out every so often, afraid of any harm that may happen upon him.

After the human returns to the library after finding out that latex is blocking the door Puro will say that he intended to save you so he could earn your trust, but there was not much danger and he did not want to be a burden on you.

Heralded as a failed experiment in the initial trials of the "Genetic Project", Puro recounts how as a pup he experienced The Riot; an uprising of the patients who underwent genetic transfur in order to prevent their pending extermination at the hands of the humans in the facility.

Upon their escape and consequent takeover of the facility, Puro gradually fell out of the primordial desires of his peers' hunger to transfur other humans and instead found himself scouring the library with a newfound sense of curiosity and awareness in humankind. Over the years he set out to learn to read, write, talk, and even draw as he studied in isolation. Knowing that there was still one human left in the facility, he initially waited outside of the locked room in which the human wakes up in for a long period of time, but that he eventually lost hope that the human would emerge. In a last effort, he decided to leave hints scattered across the facility, with the intentions of aiding the protagonist until he could reach him safely, with the end goal being that he thought that he could lure the human into the library with the various hints he left in the form of the notes he wrote, in the case that the human ever woke up and began to explore the building, in the hopes that the human would be able to successfully make it to the library in which Puro would be waiting to transfur him, with the intention of this being so that he could become strong enough to escape the facility on his own; however, by the time the protagonist arrives, he is secretly disappointed with the human's body (although this is revealed to the player further on in the game) and instead whimsically hopes to see the outside world with the human instead and is willing to help him in any way possible. In the present, he can be seen as having a "home" in the ventilation system where he lives off of rainwater and fruit (confirmed to be oranges in Special Edition) grown from the tree in the library.

There are two props that Puro provides at the start of the game. Both of these are completely optional to use but using them will make the game easier. As the Special Edition is incomplete, it is unknown whether using these will lead to a good ending or a bad ending. It can be inferred that it is good, as Puro seems happy to hear that the props were used.

The first prop is a cardboard cutout of a black latex creature. It is used by pulling on a string in the Ming Cat's room, labeled with a yellow paper. It will stun the cat, allowing the protagonist to move forward a bit without being chased. This is also useful for reading the papers on the walls.

The other prop is a black latex costume. This will allow the human to pass through a room of the black latex territory without having to sneak. Using this will trick the black latex into thinking the human is one of them. Dr. K will attempt to call him out using a broadcast, but the latex creatures will remain fooled.

There is also a lockpicking set in front of the room, but it's debatable as to whether or not it was left there by Puro or K, most probably in an attempt to gain entry to said room. Either way, it serves no purpose other than being a map prop, although upon player interaction, the human is mentioned to not know how to use it. 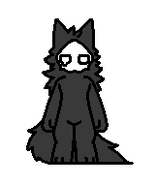 Puro reading a book in his home

Puro pointing to a direction in a painting

Puro tries to use a camera 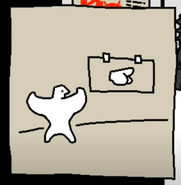 Puro's expectation of how the Human would be 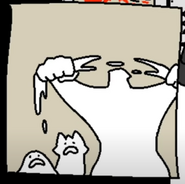 Puro's expectation of the human defeating a latex beast. 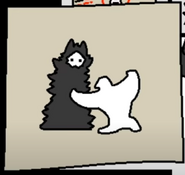 Puro (In his drawing) about to transfur the human. 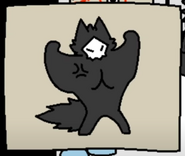 Puro after transfurring the human.

Puro when Colin is transfurred in front of him

Puro confused at the transfurred Colin

Puro transfurring Colin into another part of himself
Community content is available under CC-BY-SA unless otherwise noted.
Advertisement