This article is a stub. You can help Changed Wiki by expanding it.
Reason: TBA / None provided.

Changed: Special Edition is an extended version the game Changed. It became available on Steam as a celebration for the second anniversary of Changed. It is not downloadable from the Steam store, and instead it will appear in the Tools section for anyone who has purchased the original game, available as a free download. Certain difficult moments are made easier, and layouts have been altered. There also new mechanics, the most well known being Fusions.

If you wish to play the special edition, it is highly recommended that you play through the original Changed first, so that you can gain an understanding of the lore and mechanics.

(Please note that the Steam version of the demo is not up to date. To get the updated versions of Special Edition, you must support the creator's Patreon, after which you can download it from there.)

The game plays relatively the same as the original. The player still controls the human, but there are new additions to the game, such as new rooms, maps, and transfurs. As well as this, the game seems to be way more fair to the player. For example, the special edition will give the players more hints as opposed to the original.

On the left is Special Edition, and on the right is the original for comparison. Notice the icon above the vent to the left of the human, hinting towards interacting with it. This icon is not present here in the original. 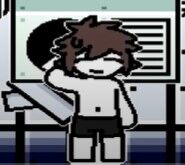 When the floor is slippery
Community content is available under CC-BY-SA unless otherwise noted.
Advertisement